Taking pride in delivering a consistent and professional level of service to our customers is paramount.

When a team member see's that something is wrong, out of place or against our mission, then you do something about it.

You may need to bring it to someone’s attention or take initiatives to rectify it. Conversely, when you see something positive, say something to congratulate or give support to your other team members.

A "Can do" attitude is all about demonstrating to customers that they are number one to us.

It means that we need to find a way to solve or rectify any problems that might arise, ensuring that the customers best interests are always at heart.

The way we do this is by taking ownership of our customers problems, and ensuring we tackle any customer issues with a positive and proactive approach.

Demonstrating "team work" means making sure that individuals goals and needs are developed in relation to the wider goals of the team.

The way we do this is to encourage regular and effective communication across a wide variety of team members to ensure everyone is working together towards one goal.

Having fun and smiling is a choice thing. It is also infectious. It will brighten yours, your team mates and a customer’s day.

Have a laugh, and take pride and enjoy your work with a smile on your face and see how you feel!

It feels good to come to work with a smile - its even better when you can leave that way also.

At Motorama we are genuinely looking to improve as individuals, and we are also looking at new ways to provide our customers with a “COOL” experience.

In the past year, our staff completed over 5000 hours in both internal and external training to ensure we are across the latest industry standards - be it customer service to staff management, to factory training on the latest diagnostics equipment to seminars on best practice inventory management.

Innovative and sustainable design that minimises Motorama's impact on the local environment have been critical design features in Motorama's recent facility developments and refurbishments.

Features like bio retention basins, use of alternative energy sources like solar, green spaces with plants and tree's, natural and LED lighting along with rain water harvesting are now standard on all new sites. Staff and customers are encouraged to actively recycle through dedicated bins on site.

Our flagship Moorooka dealerships on Ipswich Road have both won environmental awards.

The Motorama Toyota dealership was awarded Toyota's prestigious 5 STAR Environmental Dealership Award in June 2012. As South East Queensland's first 5 star dealership, and one of only a handful of dealers nationally to receive this award, it recognises Motorama for developing an environmentally sustainable dealership & implemented green values to Toyota's strict standards.

Motorama City Holden has been recognised for achieving Green Stamp Level 2 - Beyond Compliance - an environmental accreditation developed by the Motor Trade Associations & Government agencies to assist dealership in reducing their environmental impact. This standard was achieved in September 2012. 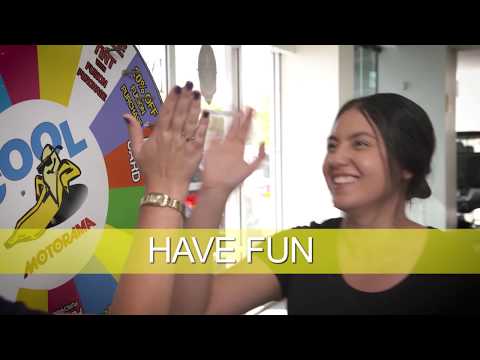 Company Info
Back to Top

1060 Ipswich Road, Moorooka, Australia
Reg Office: Motorama Management Pty Ltd 1050 Ipswich Road Moorooka Queensland Australia
Reg. Company Number: 36010584175
Back
Vehicle Valuation
Compare Saved Vehicles
Top
Close
Your Cookie Settings
Select your cookie settings
Strictly Necessary Strictly Necessary cookies are essential to let you move around the website and use its features, such as accessing secure areas, shopping baskets and online billing. These cookies allow our website to provide services at your request.
Functional Functionality cookies are used to remember the choices you make, e.g. your user name, log in details and language preferences. They also remember any customisations you make to the website to give you enhanced, more personal features.
Targeting Targeting cookies collect information about your browsing habits to deliver adverts which are more relevant to you and your interests. They also measure the effectiveness of advertising campaigns.
Save Settings
Cancel Changes

Your settings will take affect when you refresh the page or move to a new page. Find out more about cookies