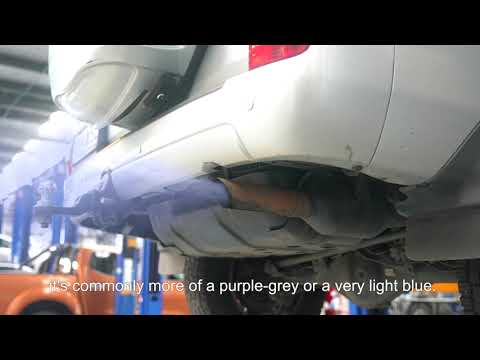 What does smoke coming out of the exhaust mean?

Posted by Motorama in Servicing Tips

A little bit of white smoke from the exhaust on a cold morning can just mean steam, and is fairly normal.

But what’s a normal amount of smoke from your car – and what should you call the service department up for?

Overall, your car shouldn’t blow a lot of smoke, especially if it’s a newer model that should have all sorts of filters in the engine to stop pollution. Older cars should usually run fairly clear as well – as long as they’ve been properly serviced – but you might expect an older car to blow a little bit more smoke than usual, but not so much that you’re blinding other cars on the road.

There are three colours of smoke that commonly indicate a problem with the engine, and you should take notice if your car starts to produce excess smoke.

Smoke that’s white can point to an engine that’s running hot, so it may indicate a problem with the cooling system like the intake manifold or head gasket causing a problem with the coolant. These can be serious, engine-wrecking problems if left untreated, so it’s best to book in a service appointment soon after you notice it.

Blue smoke usually indicates a problem with oil, and can often be confused for white smoke leading to bigger problems down the line if the right parts aren’t addressed at service.  While it’s commonly called ‘blue’ smoke, it’s commonly more of a purple-grey or a very light blue.

This smoke is often accompanied by an overall loss of power, or the car struggling to accelerate. This is certainly the case with turbocharged cars – as blue smoke can also mean that the turbocharger has something wrong with it.

On a regular, petrol-powered vehicle, blue smoke from the exhaust usually means that the car is burning oil – but there can be several causes for this. There may be a leaking valve, which is letting oil get into places in the engine that it’s not supposed to, causing smoke to come out of the exhaust. If your exhaust starts blowing blue smoke, it's best to pull over and call your roadside assistance provider, if you have one. If you keep driving, not only are you creating a hazard for other road users, any leaking oil could catch fire in your engine bay.

Black smoke from the exhaust points to a problem with the fuel, which is either contaminated or mixing too heavily with oil in the engine (it’s supposed to mix, but with the right balance of oil and fuel). If it’s just a burst of smoke that then clears, then there shouldn’t be a serious problem – but it’s probably worth mentioning it to your service advisor at your next service.

If there is an excess amount of black smoke pouring out of your exhaust, then you have a bigger problem. The sensors, injection system or fuel line may not be functioning properly, all of which will need a trip to the workshop to address the problem. Leaving the problem may cause you to use more fuel than usual, as well as creating a hazard on the road and potentially making your car unroadworthy. As with blue smoke, it's best not to keep driving with it, as any fluids coming out of the fuel line are potentially flammable.

How to fix it

Fixing a smoking car is a little trickier than topping up fluids, because it’s usually an indicator of a problem that could be more serious than you realise.

You can diagnose or isolate the problem, which will help you tell the service advisor, so that they can get a better idea of what to treat when they’re looking at your vehicle. Take note of any loss of power, or rough running at speed or idle and noises coming from the engine.

Get it towed to a service centre – try not to drive it, because that may damage the engine more.

The service teams at each Motorama dealership can help diagnose a smoky engine, find the problem and help you get back on the road sooner and send your car with a clean bill of health. Regular servicing is also necessary to keep your car problem-free on the road, so if it’s been a while since your last service, make an appointment soon to prevent any breakdowns from occurring.

At Motorama we have Brisbane's best service centres located at Moorooka, Browns Plains and Springwood. We service all makes and models.

We've just a few service offers that cannot be missed. What about a $169 service special, $99 balance, rotate and alignment offer or our $69 alignment offer?

We’re growing & we need more great people to grow with us! If you’re a Technician, Parts Interpreter or Service Advisor, get in touch!